2nd International Mission at Gulbarga – A Step towards Cleft-free India

Our 2nd International Mission at Gulbarga, Karnataka, India took place from June 25 – 30, 2017. This was our 2nd Mission in partnership with Muthoot Pappachan Foundation . The venue was at ESIC Medical College & Hospital. This was over the 4th Mission in Karnataka. The team of 50 volunteers from India, USA, Malaysia & Philippines, along with team ESIC Medical College & Hospital-Gulbarga joined the mission. There were also student Volunteers from ESIC Medical College, Non-medical volunteers from Muthoot Fincorp Ltd-Karnataka. The team had screened 108 patients, and performed 64 Surgeries during 4 surgical days.  We received 80% of post-op turn out on the day of one week follow-up.

We had an inaugural ceremony of this mission on June 25. This was in presence of the Honorable Minister of Medical Education Government of Karnataka- Dr Sharan Prakash Patil. Other dignitaries present were as follows :

Many well-wishers of Mission Smile  from govt. and non-govt. entities & dear volunteers of the Mission were also present.

During the mission there was a patient named Saba Fatima (1 Year old) who truly touched our team. Her parents Javeed Ahmed and Qamerunnisa were very upset when they saw that their 3rd baby was born with cleft lip deformity. Her parents looked anxious and nervous when they reached the hospital. But Fatima’s captivating bright eyes and her calm nature captured the attention of everyone in the team.

Fatima’s family lives in Gulbarga town itself.  Fatima used to cry a lot as she was not able to eat properly due to her cleft deformity. Her Parents were extremely nervous when they saw their 3rd baby born with cleft lip  Her mother knew not how to deal with the deformity since her first 2 babies were completely normal. She thought it was God’s curse on them for their unknown sin! Despite having 4 medical colleges in Gulbarga, Fatima couldn’t receive her surgery in any of the hospitals she visited.

The other family members and their relatives were very accepting of Fatima since they thought it is God’s creation. In fact, they used to motivate Fatima’s parents by saying, “Fatima will be alright when she will receive her surgery at a good place. She will be as normal as the other two children of the family”.  Fatima’s father is a shopkeeper and he earns an average of Rs. 10000 per month. It wasn’t easy for Fatima’s parents to take her to a private hospital in Hyderabad for the surgery. However, her parents were ready for the surgery even if they have to sell their agricultural land.

In the meantime when Fatima turned 9 months old (March 2017), they met a branch manager of Muthoot Fincorp Ltd and came to know about the free surgical camp that will be organized at the ESIC Medical College & Hospital. Mission Smile’s free surgical camp turned out to be an April shower to enkindle their hopes. They were informed by the branch manager to visit the screening on June 25th which was the last day of Ramadan.

Despite being Muslim, they rushed to the screening on the day before their waited festival of Ramadan Eid. It was so great to see their keenness and hope of their child Fatima getting operated on. The medical team screened Fatima and she received her surgery on the second day of the Mission.

As per the plan, Saba Fatima received her surgery on the second day of the mission. The magical hands of our volunteers managed to give a beautiful new smile to this much deserving child during the Karnataka Mission on June 2017. Mission Smile restored another family from the feelings of shame, ridicule and helplessness.  With every smile, with every touch, with every effort, with every hope – we all are changing the lives of many! 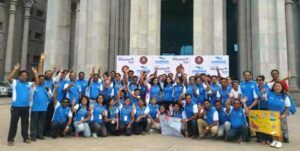 We would like to thank the entire team that delivered such great smiles to many lives in this mission. Our heartfelt thanks to all dear volunteers for their selfless dedication. We thank team ESIC Medical College & Hospital for being so welcoming and accommodating. Hour heartfelt thanks for the volunteers from Muthoot Fincorp Ltd. under the guidance of Dr. Prasanthkumar Nellickal for helping us right from patient identification to completion of the mission; you are the best!

Special thanks to our team leaders Dr Rashmi Taneja & Dr Krishna HM for your love, support and guidance. You both led the team from the front and handled every issue so beautifully before it became a challenge. Finally, this mission, or any mission, would not have been possible without the dedication of the student volunteers.

Congratulations and thank you to all who made this mission such a success!

Your help can bring smiles to others like Saba Fatima, donate to Mission Smile and support us in continuing our free cleft surgeries.

Get amazing stories of change in your inbox